The Image of Russia in the Balkans 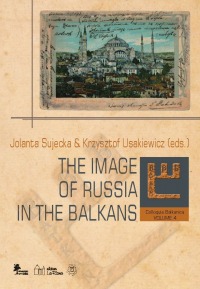 In some aspects, The Image of Russia in the Balkans continues the first book in the series, The Semantics of Russia in the Balkans, though the present volume definitely contains more extensive material and covers more issues. The image of Russia presented in the papers making up the volume, though multi-themed, seems to split into two main types depending on ethnogenesis and language on the one hand and religion on the other. One might think that there is a Slavic image of Russia, which involves the Slavic cultures of the Balkans, and an Orthodox image, which is Greek and to some degree Albanian and Romanian. This would be the result of the dual discourse developed by Russia with regard to the Balkans that Pedro Bádenas de la Peña writes about.
Meanwhile, Balkan images of Russia create more of a multi-layered structure subordinated to Balkan cultural perception while also conducting a dialogue with Russia and its legacy. Developing from the Byzantine tradition, the Balkans and Russia essentially form a space of mutual ties that goes far beyond the cliché of liberator and liberated.
Opening up to influences coming from South-Eastern Europe in times when the Ottoman threat was increasing, Russia in a way repaid its “debt” incurred in the early 18th century by sending teachers and books to the Habsburg town of Karlowitz (Sremski Karlovci, Karlovatz). (…)
Thus everything came full circle: having taken in refugees from South-Eastern Europe, Russia (…) returned to Turkish Europe, to the Balkans, as a player but also an ideologue, wanting to liberate but also to decide. The only thing is, contrary to the European powers, Russia was a part of that world, which is why its role in the Balkans was different, and this is what the present volume sets out to show.