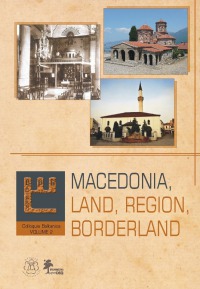 The Volume no 2 of “Colloquia Balkanica” entitled Macedonia: Land, Region, Borderland, produced by an international team of researchers under grant No. NN108 187138, presents a synthetic approach to this territory’s history. The key to the research for this synthesis is connected with the image of Macedonia, a consequence of the premise adopted by all the participants of the grant. The period covered by the present volume begins in the times of the ancient Macedonian state and ends with the discussion on the Macedonian nation which took place in the mid-1940s. The first part of the monograph, History, is devoted to the history of Macedonia’s image and also the names “Macedonia” and “Macedonians”, from antiquity to the latter half of the 1940s. Part two, Context, starting from the 17th century and ending with the first dozen years of the 21st century, includes extensive material that is cultural, ideological, linguistic and anthropological in the broad sense of the term. The decision to structure the volume in this way was based on the conviction that the history of notions cannot exist without an ideological and linguistic background, and the territory of Macedonia is a special niche for both these aspects as well as demanding description by ethnographers and anthropologists.