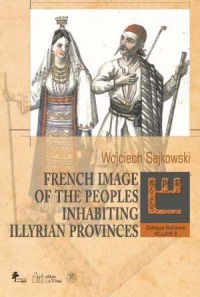 Pobierz fragment lub całość
W serii Colloquia Balkanica ukazały się:
Autor: Wojciech Sajkowski
Wydawca:
2018, Edition La Rama, Warszawa, Wydawnictwo DiG
Jednostka:
Komisja „Bałkańskie Śródziemnomorze”
The existing literature on the subject, which depicted the Western discovery of the “Wild Europe”, encompasses some of the most important aspects of this very broad issue. However, some of the very important problems did not get as much attention as they deserved. Among them one can mention the question of the French contribution to shaping the Western European image of the Balkan peoples. The French were vitally interested in the matters of that part of Europe, and even reigned the considerable part of the territory which was later named the Balkans. This episode, which started with the Napoleonic occupation of Dalmatia in 1806 and was followed by its further expansion in 1809 and creation of the Illyrian Provinces, ended very quickly, in 1813. The ephemeral nature of the Illyrian Provinces, and the short presence of the French in the area of the eastern coast of the Adriatic Sea in general, is perhaps the reason why the researchers who investigated the evolution of the idea of the Balkans ignored this episode of the Napoleonic reign in Southeastern Europe. This monograph aims to fill this gap and strives to supplement more general studies on that matter. Due to their ethnic versatility, the Illyrian Provinces are an excellent subject of research on the Western depictions of the Southeastern European populations. It is also an interesting research subject in terms of the discussion on the view on the borders of the Balkans, or the Orient of Europe.