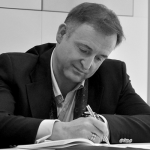 Wierciński pays special attention to the dialogue between philosophy, theology, literature, rhetoric, education, law, medicine, and architecture. As the art of interpretation and the art of being in the world, hermeneutics largely overcomes the divisions between university departments, disciplines, cultures, languages, and religious traditions. It promotes an interpretive approach to the diversity and complexity of human experience in the world.

Wierciński’s earlier work centers on the hermeneutic rereading of medieval sources. Inspired Metaphysics? Gustav Siewerth’s Hermeneutic Reading of the Onto-theological Tradition (2003) is the first full book-length introduction to Gustav Siewerth’s philosophy in English. The translation of Siewerth’s texts into English is a hermeneutic enterprise. Translation is, in itself, an interpretation. A hermeneutic reading of Siewerth placed within the tradition of onto-theology and set in relation to Heidegger discloses original insights of medieval thinking.

Searching for the new proximity of philosophy and theology, Wierciński shows that the strict separation of philosophy and theology is not tenable. Hermeneutics is neither theology nor philosophy but must remain open to both disciplines if it wants to remain faithful to the voices that create the tradition that we are. In his Hermeneutics between Philosophy and Theology: The Imperative to Think the Incommensurable (2010), Wierciński understands theology not just as an academic discipline; it is the way we are in the world. With some restrictions, the same can be said about philosophy. In this case, not only do the two disciplines collide, but two alternative ways of being a human being are suspiciously watching one another and are, at the same time and for each other, a challenge and a threat. Hermeneutics excludes hasty problem-solving, whether it is a liberal synthesis of two separate discourses or a post-liberal blurring of differences. The ongoing dialogue does not allow for the final conclusion.

Wierciński interprets hermeneutic existence as a phronetic existence: Cultivating practical wisdom (φρόνησις) comes from life, influences life, and transforms life (Hermeneutik und Metaphysik: Bildung im Gespräch zwischen Philosophie, Theologie und Dichtung, 2017; Existentia Hermeneutica: Understanding as the Mode of Being in the World, 2019). The experience of hermeneutic truth as the truth of interpretation requires personal commitment and existential response. It expresses the hermeneutic moral imperative. As practical philosophy, hermeneutics motivates a person to actively participate in the community’s life, which is our inseparable and inalienable right and moral imperative. The basic dialogical structure of a human being underlines the fundamental importance of conversation. Language permeates the human being, and it is the language that reveals us to ourselves as polyphonic and dialogical beings. In mutual communication–speaking and listening to one another–a person discovers that he/she can communicate with others, thus creating a community of communication.

Wierciński’s work on poetry, especially Czesław Miłosz, shows that poetry is the concretization of the relationship between Being and the poet, who through his/her rootedness in Being discovers an opportunity to reveal Being in the word and the world. The positioning of poetry in relation to Being is possible due to its closeness to Being and (dis)closes its (re)vealing character.