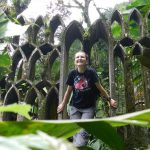 A Ph.D. student at Interdisciplinary Doctoral Studies (Środowiskowe Transdyscyplinarne Studia Doktoranckie) at the „Artes Liberales” faculty. Her Ph.D. research topic is Spanish-contact induced innovations in Huasteca Nahuatl and Tének. Elwira has an M.A. in Ethnolinguistics from Adam Mickiewicz University, Poznań (2004) and an M.A. in Language Documentation and Description from SOAS, University of London (2010).

Elwira has experience working with the speech communities of endangered languages in Mexico (Huasteca, Milpa Alta, Tlaxcala, Sierra Norte de Puebla), on Guernsey Island and in El Salvador. Since 2014, she has been involved in documentation and revitalization projects in the Huasteca Potosina region of Mexico where she has been working with the Nahua communities giving talks, organizing Nahuatl orthography workshops for school children and cooperating with local NGOs promoting social justice (e.g. gender equity workshops). Elwira considers herself an adopted daughter of her beloved town of Xilitla, where she also cooperates with the local government, NGOs and businesses revitalizing the indigenous culture and language of the region. In 2015 she received a grant from the Foundation for Endangered Languages to document the oral tradition of the Huasteca Potosina region which resulted in the publication of a bilingual book (Nahuatl and Spanish) called Kamanaltlajtolmej Xilitlan: Narraciones en náhuatl de Xilitla. In 2016, Elwira formed a collective group with native Nahuatl speakers to document traditions of the Nahua people; this group also gave a free weekly Nahuatl course in Xilitla in summer 2017. During her stay in Mexico she has given over 100 hours of talks and workshop on language, cultural heritage and indigenous identity at Mexican universities including the UNAM, FES Acatlán and local intercultural universities, as well as in primary, secondary and high schools.

Elwira values teamwork, exchange of information and international contacts in successful academic projects. As a member of the research group „Spotkania Starego i Nowego Świata” („Encounters between the Old and New Worlds”), she has been involved in several projects at the „Artes Liberales” faculty including: Europe and America in Contact, Engaged Humanities and recently also LCure (all directed by Justyna Olko, Ph.D., D.Litt.).

Elwira enjoys talking about her work with the indigenous communities and has been invited to do so on Mexican radio (XEANT, Voz de la Huasteca; UASLP Radio Universidad), Polish radio (TOK FM; „Trójka” Polskie Radio) and on television in Mexico (Televisa; TV Tamazunchale). She accepts invitations to explain the importance of her work to general public as she does frequently in Mexico and in Poland (e.g. talk at Wędrówki Club in Wrocław).

A ‘small’ language in contact with a ‘big’ one: The loss of alienability distinction in Tének (Mayan) under Spanish influence.
45th Poznań Linguistic Meeting, Adam Mickiewicz University, Poznań, Poland (17-19.09.2015).