It may seem rather anachronistic for contemporary humanities studies to decide to publish, in extenso, such a voluminous collection of source material, a large part of it in Latin. The huge amount of work and resources that such a project involves not only makes it difficult to carry out, but also requires one to consider the question of the arguments in favor of such an undertaking. The huge correspondence of Ioannes Dantiscus, with all its importance for Poland’s history, still reflects the activity of a man from the periphery of Europe, who is very little known outside the group of specialists dealing with the times of Sigismund I.

It may seem somewhat surprising that, at the times when work on volumes of the correspondence of such people as Erasmus of Rotterdam, Philippus Melanchton or Hugo Grotius is progressing with difficulty (because of a shortage of interested specialists, insufficient funding and, primarily, the lack of interest from potential readers), there are plans for a publication containing a large part of Dantiscus’ correspondence. After all, from the point of view of the European historical memory and cultural tradition, one could find at least two dozen more famous representatives of Respublica Litteraria Europaea.

The team carrying out this project is certainly not guided by the same motives that in the 19th century caused the literature and culture of the so-called Polish Golden Age to be treated as a peculiar treasury of national memory, when every edition of sources from that age became a valuable exhibit in the “mausoleum of things Polish”. Neither do we feel that we are motivated by any excessively high opinion of the role of Poland and its culture on the international arena in days of old, nor by a desire to confirm our being Europeans, our return to Europe, as people here have been so eager to repeat over the past decade. What fascinated us in Dantiscus’ legacy were the things that interested scholars in bygone generations only slightly, or even – if noticed at all – were sometimes minimized or eliminated by them for ideological reasons.

Dantiscus’ activity and writings seem extremely interesting in our times because of a twofold inter-cultural element: As a person he was the product of a special cultural borderland; he also came to be an intermediary between different areas with very different historical and cultural traditions. His German identity (which was rather complicated, considering the fact that his ancestors came from central Germany to the State of the Teutonic Order, from where his grandfather moved to Gdańsk, where Dantiscus was born 20 years later and took his name from his native city) did not prevent him from binding himself to the royal court in Cracow from early youth, at a time when – under the rule of Sigismund I and his wife Bona Sforza – this city was being transformed into a Renaissance capital. His diplomatic missions made it easier for Dantiscus, who successfully wrote poems and had broad interests in the humanities, to obtain citizenship of Respublica Litteraria Europaea. He established personal and written contacts with practically all the greatest figures of politics and culture. At the same time, special ties bound him to the Spanish community, where he spent almost ten years. In a way, this experience made him into a Spanish noble, not only because he received a new coat-of-arms from Emperor Charles V for his service, but mainly because even two generations later he was remembered as a model Spanish hidalgo. Like no one from Eastern Europe before him, he shared in the experience that was to change all of Europe – the gradual discovery of the New World. Treated in Poland as an expert on these issues, he succumbed to a lasting fascination with the world of maps and globes. Let us also add that after ending his diplomatic activity, as the bishop of Chełmno and Warmia, he became the ex officio leader of the Counter Reformation community that administered Warmia – a Catholic enclave cutting into the borders of the first Lutheran state in history – Ducal Prussia (whose formation he had in fact helped bring about as a diplomat).

Such a biography caused Dantiscus to be the subject of disputes between Polish and German national historiography on many occasions in the past. There were attempts to turn him into a Polish patriot aware of the German threat to Poland (a poetics understandable after the experience of two World Wars), or else a German belonging to the German culture and only bound to Poland administratively. Today, however, someone with such a complex borderland identity can be of great interest to us.

Dantiscus’ correspondence is extremely interesting not only as a kind of non-fiction literature, which any corpus of letters is by its very nature. With a thorough investigation, one realizes that these letters shed special light on an issue fundamental for an era that was so important for Europe – the issue of unity and variety among the continent’s elites. A journey in the footsteps of Dantiscus – a humanist, world-class diplomat, born and educated on the northern outskirts of the multiethnic and multicultural kingdom of the Polish Jagiellons, and active primarily in countries remaining under the Habsburg rule, gives us a better understanding of the humanistic European community. It also allows us to better understand the situation of this Literary Republic (Res Publica Litteraria) at the moment of birth of a new era that ended the continent’s religious unity while also transforming the one and only world into the Old World, contrasted with the New World. The eastern and western borders of this Republic – Spain and Poland – become prominently visible.

This European space involved strong tension resulting from the conflict between dreams of a universal state and the growing tendency of individual nations to emphasize their identity and extend the autonomy of their own states. Members of the humanist elites are thus spokesmen for both tendencies, strengthening and at the same time weakening the structure of the supranational Empire; they integrate and disintegrate the sphere of religious life. They are spokesmen for both political strategies that will clash over the next two centuries, two different concepts of being a European: the dreams of a return to a community of the same scale as ancient Rome, and the revolutionary desire to break free of the “Roman enslavement”.

The language of Res Publica Litteraria was humanistic Latin, its model being the prose of Cicero, though it differed from the language of Marcus Tullius through the experience of fifteen centuries. National languages were auxiliary languages. In the case of Dantiscus, this role was filled primarily by German – the language of his childhood and also of that part of Poland where he was active once his diplomatic mission ended. Germany and German-language circles played a major role in his relations and contacts. However, national languages (some of Dantiscus’ correspondence was written in Spanish, Polish, French, Italian, Flemish and Czech) were rather like clothes for wearing at home, reserved for intimate, family, less formal situations. Latin remained the “gala-dress” from Scandinavia to Sicily, from Lisbon to Vilnius.

Dantiscus’ intensive and regular correspondence is the only such extensive and rich collection of letters from the Golden Age linked to a single person from East-Central Europe.

From the point of view of the times we live in, reflecting on this humanistic community not only serves to satisfy our natural curiosity about the past, but also fits the nature of our own expectations and anxieties. At this moment, when the new European community is taking on an increasingly institutional form, the inhabitants of centres and peripheries are thinking about their role in this future community. The problems that the elites of our world are having with their own identity show that the dilemmas and hopes of the first half of the 16th century, seen through the eyes of a diplomat-humanist, are very close to our hearts. Today it is important to awaken the “historical sense” – to use a concept proposed by T.S. Eliot – as its lack threatens to lead to the extinction of historical memory and, paradoxically, opens the way for hatred and nationalism. The message left by the European humanistic community should be an important component of the new Europe’s “historical sense”. The output of Ioannes Dantiscus is part of that message.

The plan to make the letters of Dantiscus or their most attractive part available to a broader group of scholars than just those who deal with manuscripts in their work, was born quite early. Already in the early 18th century the so-called Uppsala Codices (The University Library in Uppsala has two volumes of Dantiscus’ correspondence, manuscript catalog No. H.154, H.155) started being – per fas et nefas – copied and prepared for publication in print. The stories behind successive attempts can be found in the introductions to the individual volumes in this series. In the beginning of the 20 th century, Antoni Marian Kurpiel accumulated an impressive amount of source materials when preparing his biography of Dantiscus, ultimately never completed. (cf. B. PAU-PAN ms No. 8239-8252 (=TK 1-14)

The idea of publishing the entirety of Dantiscus’ correspondence as “an unequalled monument of Polish culture of European significance” was formulated by Kazimierz Morawski (See: Morawski 1965, p. 157 footnote 97; cf. AT 14, editor’s introduction, p. XV) when he was the president of the Polish Academy of Arts and Sciences (PAU) (from 1918), but, the work never got beyond the preparatory stage. PAU documents include one last trace: the project’s status was presented in 1924 by Stanisław Skimina at a meeting of Department I. The resolution passed at the time read “pass this publication on to the Historical Commission”. Yet, there is no mention in the Historical Commission’s documents up to World War II of the project having been undertaken. Skimina himself published a monograph on Dantiscus’ poetry in 1948, and the poetry itself in 1950. In the introduction to the monograph, he mentioned the idea of publishing the correspondence, stating, however, that “in the present situation it has to be set aside” (cf. Skimina 1948, p. 1).

The idea was kept in mind by someone who was probably Morawski’s most brilliant student, Kazimierz Kumaniecki. However, beside trying to get the Polish Academy of Sciences (PAN) interested and making an effort to obtain microfilms of the Uppsala collection, he did not undertake the publication, either. Shortly before his death in 1976 he handed his materials over to me, advising me to organize an interdisciplinary, linguistic and historical, team. This idea was put into practice in stages. First of all, in 1982, the Section of Greek and Latin Editing was established at the Institute of Classical Philology of Warsaw University (cf. Axer 1991, p. 63-71). After the Centre for Studies on the Classical Tradition in Poland and East-Central Europe (OBTA) [today Faculty of AL] was set up at Warsaw University (1991), the work was gradually transferred to the Section for the Registration and Publication of Ioannes Dantiscus’ Correspondence, specially formed within the Centre.

Today the Section is an interdisciplinary centre employing philologists and historians. After more than ten years of preparatory work, by publishing this edition of the correspondence of Ioannes Dantiscus together with the PAU we are symbolically returning to the original source of this idea. 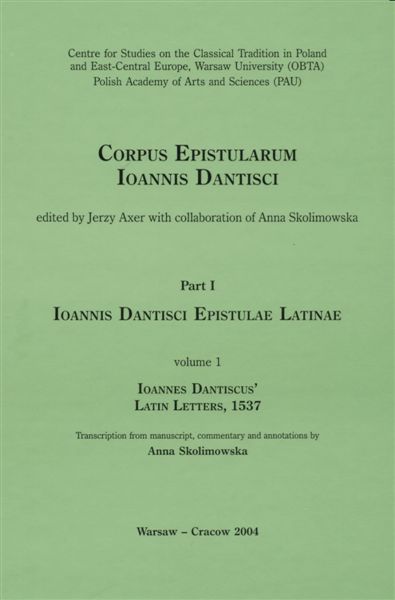 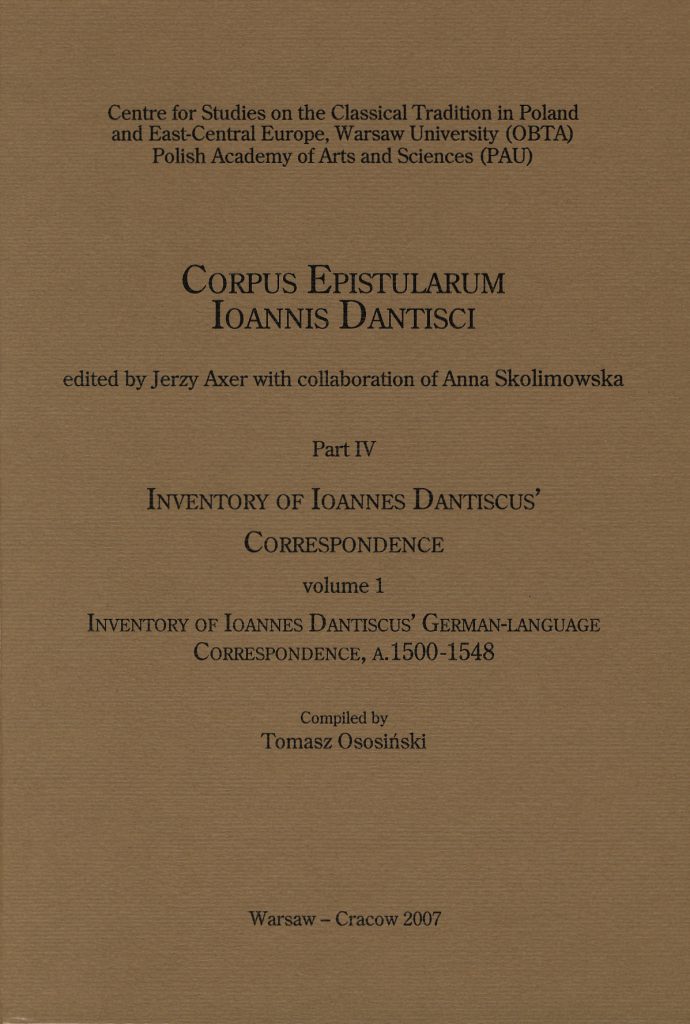 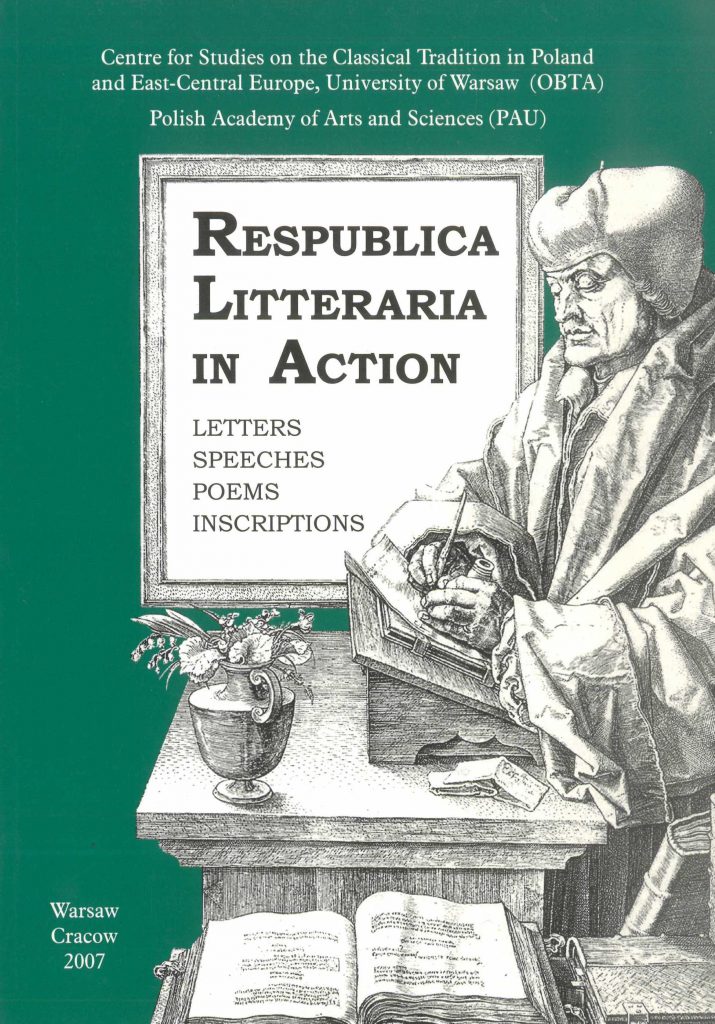 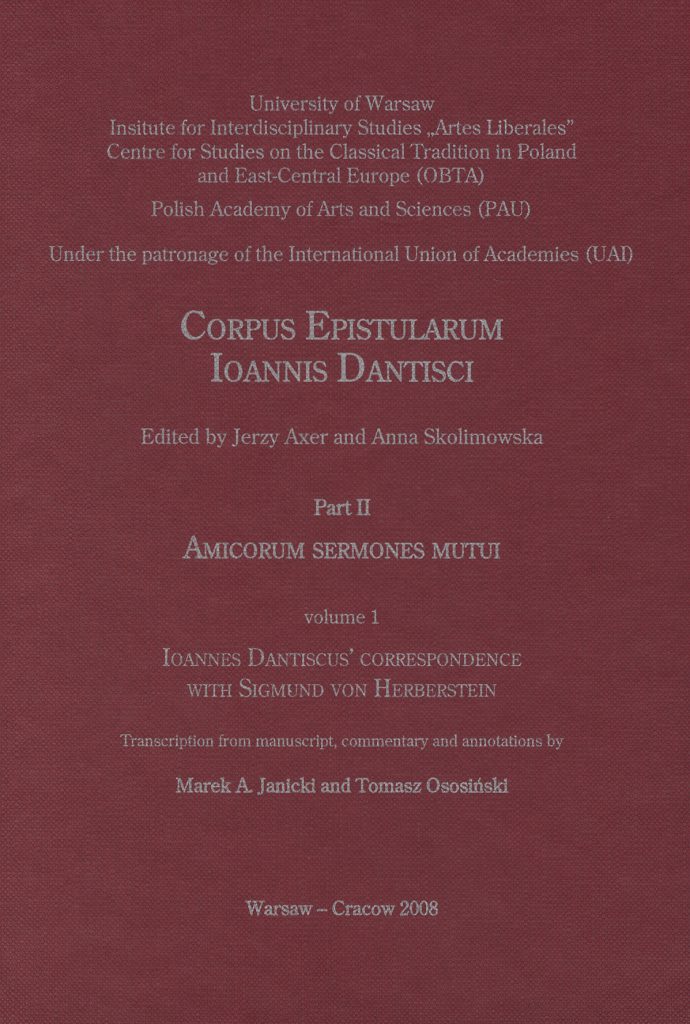 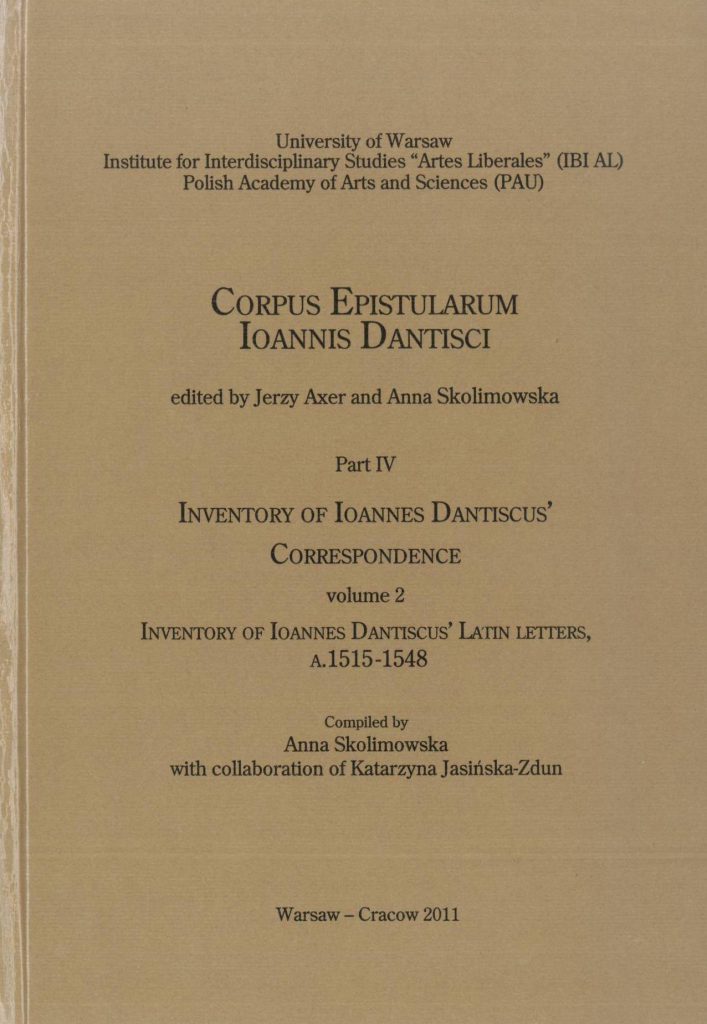 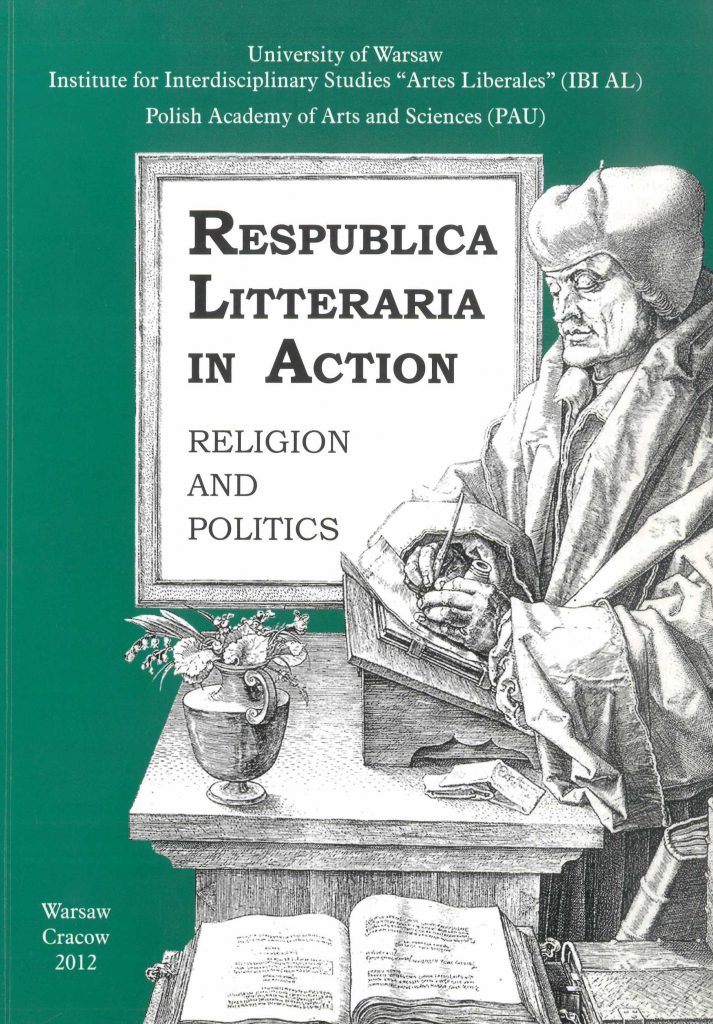 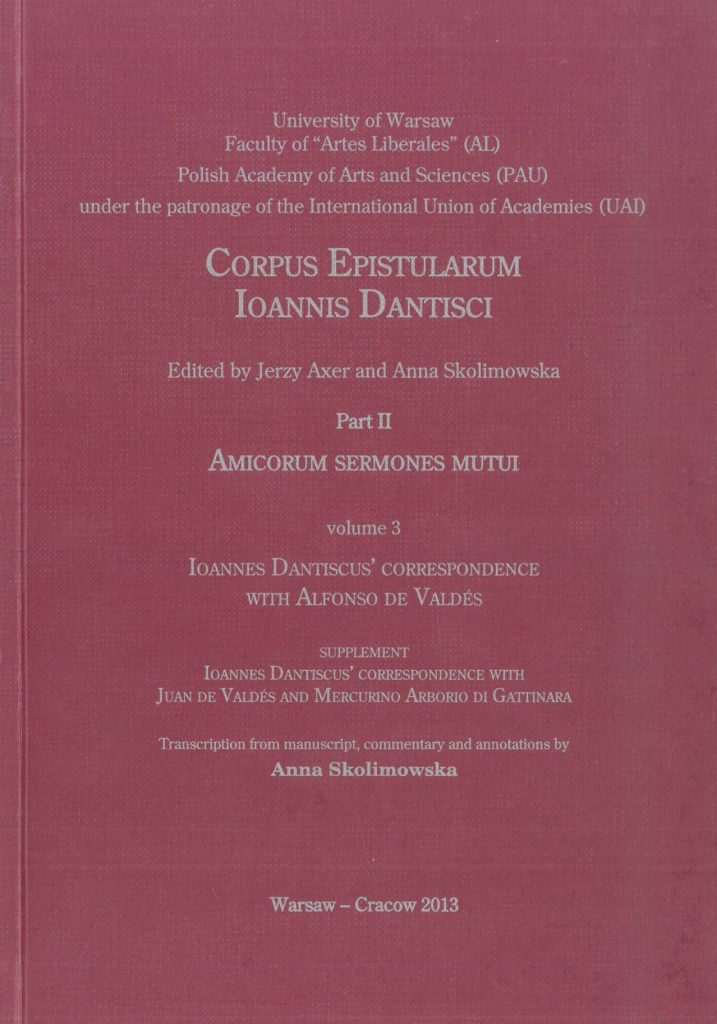 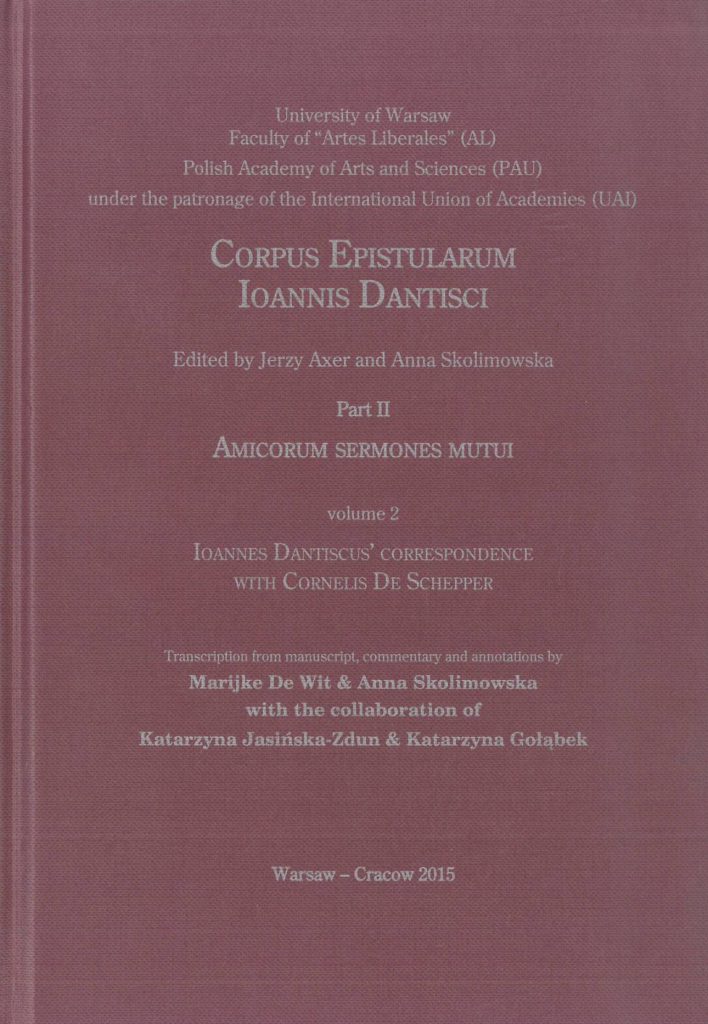 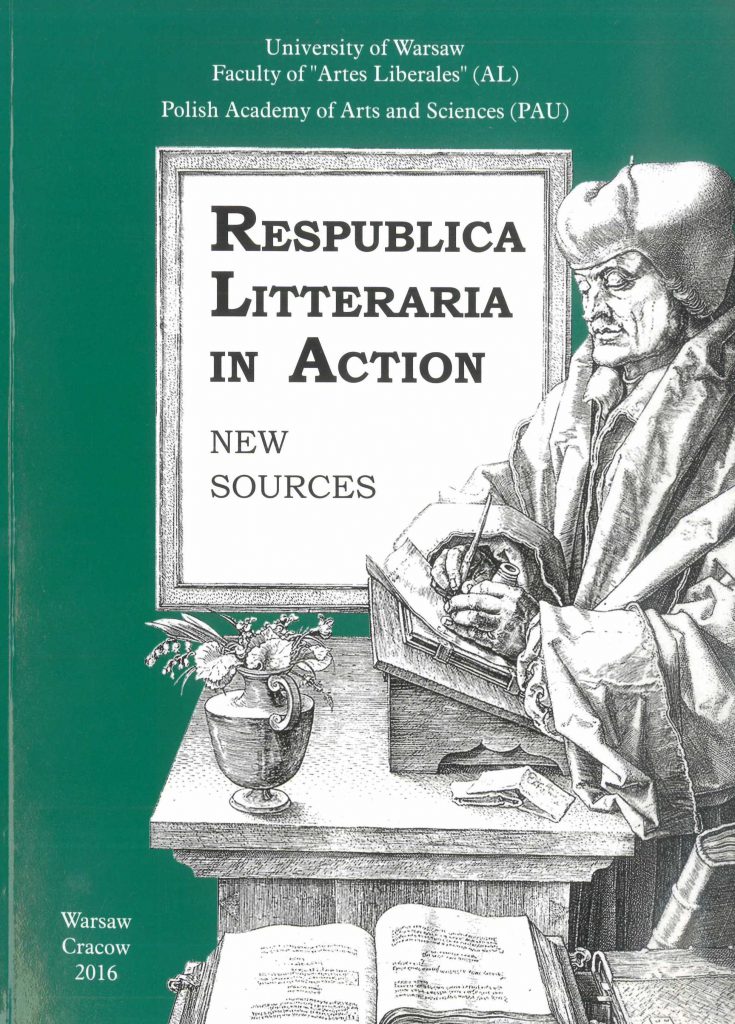 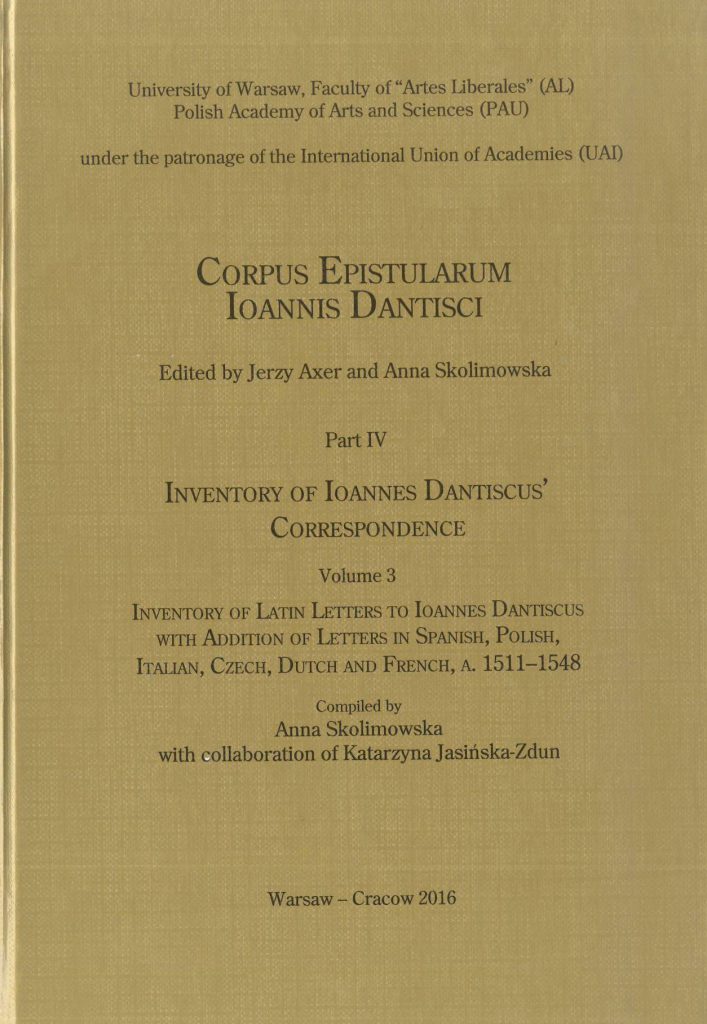 Inventory of Latin Letters to Ioannes Dantiscus’ with Addition of Letters in Spanish, Polish, Italian, Dutch, Czech and French,