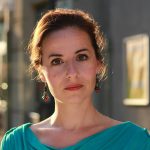 PhD student in Cultural Studies at the Faculty of “Artes Liberales”, University of Warsaw (Poland).

She graduated in Philosophy with specialization in Aesthetics at the University of Milan (Italy), with a dissertation on Gaston Bachelard’s thought about time, written after a period of study at University Jean Moulin Lyon III (France). She holds a diploma as actor at the Accademia dei Filodrammatici di Milano.

Ilaria worked as theatre artist and actor since 2003 until 2014 and trained with Anatoli Vassiliev in his theatre laboratory at the Grotowski Institute in Wroclaw (Poland) between 2011 and 2013. In the years her interests diverted from artistic production towards research, pedagogy and anthropology of theatre.

Her academic topics of interest are: the space of work and creation in the theatre research laboratories tradition, the concept of atmosphere in aesthetics and in the history of acting techniques, the “non –verbal” in dramaturgy.

Ilaria is also an acting teacher, an activity she has performed since 2009, in Italy, Switzerland and Poland. Her teaching activities are also as lecturer of Italian at the Cardinal Stefan Wyszynski University in Warsaw and as assistant in the course of Italian Language and Literature under supervision of Dr. hab. Stefano Redaelli at the Faculty of “Artes Liberales”, University of Warsaw. At the Kolegium Artes Liberales, in 2017, she conducted with Ewa Niedziałek a “kowersatorium” entitled “The space of creation: between utopia and theatre laboratories”.