The Balkan Jews and the minority issue in South-Eastern Europe 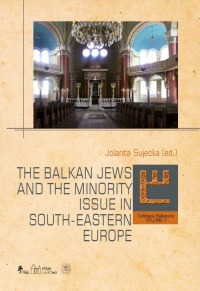 The volume The Balkan Jews and the Minority Issue in South-Eastern Europe is the first academic publication in Poland (and the world) devoted entirely to the phenomenon of Balkan Jews. The work sets out to present the early and most recent history of Jews in the Balkans to a wide humanities, Polish, Jewish and global audience. Looking from the perspective of today’s changing Europe and the world, it certainly seems worth recording this segment of the history of the Jews, a people who have always been migrants.
In the Balkans there was created a multilevel network of mutual cultural relations including languages, tradition, religion, literature as well as identity. It seems that in this region, which for centuries functioned as a multiethnic and multireligious whole, there emerged a specific model of multiethnic relations based on a kind of balancing between preserving one's own ethnic distinctness and integrating with the dominant culture. It is not just a double identity - characteristic for Diaspora Jews, but a kind of balancing between preserving his own ethnic Jewish distinctness and integrating with two (or more) other neighbouring cultures […].
The aim of the monograph is to consider the character of relations in the Balkans and the understanding of tolerance in mutual interethnic relations. However, the greatest asset of our volume is its topics, which boldly revise the ambiguous, mendacious discourse of official narratives in the Balkans.